The original Constitution created out of the presented economics logic has 9 chapters and 239 seperately named parts. Therefore it has the working name "239". That one comes in three versions with varying amounts of comments: "239 short" "239 long" and "239 medium". It is all precisely the same Constitution (by definition), except for the comments. The comments are not meant to change these laws, they all pertain to the same laws equally. One could combine "239 medium" and "239 long" to create "239 longer" (not available here).

Feel free to add your own comments of course, and name it something sensible; especially if you change laws. You never know if your work becomes well known, and nobody needs chaos with so many laws flying around left and right, especially if you do not modify the article names (for a new model I try to use new part names.)

Each new Constitution here proposed will have a special name and a number, to prevent things spiraling out of control into chaos. They are all in www.law4.org/choice. They have significantly different laws, but follow the general themes of a DAVID system (democratic Government, democratic companies, socialized finance and land distribution). They are not meant to be better or worse, they are just different. This is meant to stimulate debate, reduce the influence of any particular implementation of a DAVID system. There is not one way that is good or superior, so that all other ways are bad.

Alternative 0, "Extended" (240+ laws). This is a Constitution that goes further then the standard "239" model, with anything more undersigned can think off to make the model suffucating to corruption and such issues. This Constitution is still changing (2014), and may always be changing.

This Constitution is also presented (on purpose) as an unfinished work, where some new laws are merely argued in the section at the bottom, while others are put down without numbering and some are written as finished laws. This is an invitation to get creative yourself. In the Ratification proces of these laws, going from 3 to 7, 50 and 239 laws, this 240+ extended is the next and last step. It brings the Nation to a point where they can not merely copy these laws (if they had wished to do so before), but they will have to get their hands on their own lawmaking somehow (if they hadn't already, at least it can not completely come from this side any more.) This makes it culturally easier to later adjust the system as they see fit.

This is a Constitution based on the "239" Constitution that is condensed in length (complexity). It is a condensation of the comments on the medium length commented version, only attempting to capture the essential idea in each {N} block, without giving care to devious attacks on it, and preference to shortness. It is meant to have multiple written systems to choose from (in whole and part) so that any particular document does not become some sort of an obsession for some people making it hard to change anything. Even if the 239 version is chosen, that still means this (and different future DAVID system Constitutions) are not chosen. This way people will be forced to choose, and that hopefully means people are thinking about the content. Yet others can get their good ideas in because there would be a debate about content and things have to make sense on their own. If there is already a choice between "239" and "Condensed" then why not consider the improvements from other people ! Please, indeed ! Experiment ! Don't treat any of these proposals as any kind of authorative source for anything, thank you !

This Constitution is very short and thus easily read and ratified if agreed. It can be used as a real Constitution. It can also be used to first ratify this one, and then see if the condensed version will be good and if so do and ratify that one, and then do the same with the detailed 239 version. This makes the ratification by the people something more then hand-waving, and allows time to do thing differently first at an essential level, then at progressively more detailed levels, thus providing a thorough and honest process which may not end up it this 239 Constitution. Whatever the people want should be done, that is the greater essence of this shorter Constitution. Here some more chatter about this consolidated version: consolidated-chatter.txt

Another step shorter is to only use the first 3, which establishes a way for a great amount of people (many millions) to form decisions together. Then within those councils all else can be decided, such as what is the economic system and so on. This is only setting up a Constitutional Assembly: Constitutional Assembly version (3 laws). It also is what you would do during a revolution: setting up the new Government and then that can become a constituting assembly, to propose a Constitution for the nation.

This Constitution is written for a small group in a virtual 3D reality, small enough to not require a stepped representative (in the order of 30 people). The objective is to describe a Government and Judiciary, the economy is not described. In theory it might fit somewhere between the 3 and 7 law or 7 and 50 law Constitutions, although the fit is probably not fluid. A ratification series 3, this, 7, 50, 239 or 3, 7, this, 50, 239 could require some resolutions about otherwise conflicting elements; unless the last ratification is decided to overrule the previous ratification in case of conflicts. CDS-Constitution New elements here could be that the Constitution is solidified against popular will in the moment, and that there is an emergency court system; otherwise it is fairly similar to the other Constitutions. These new elements could be added to the finally ratified Constitution, if so desired; it might be a good idea. (CDS is the name of the virtual group this Constitution was written for.)

This is a Constitution, at moment of writing at least somewhat ratified, written for just 5 people. 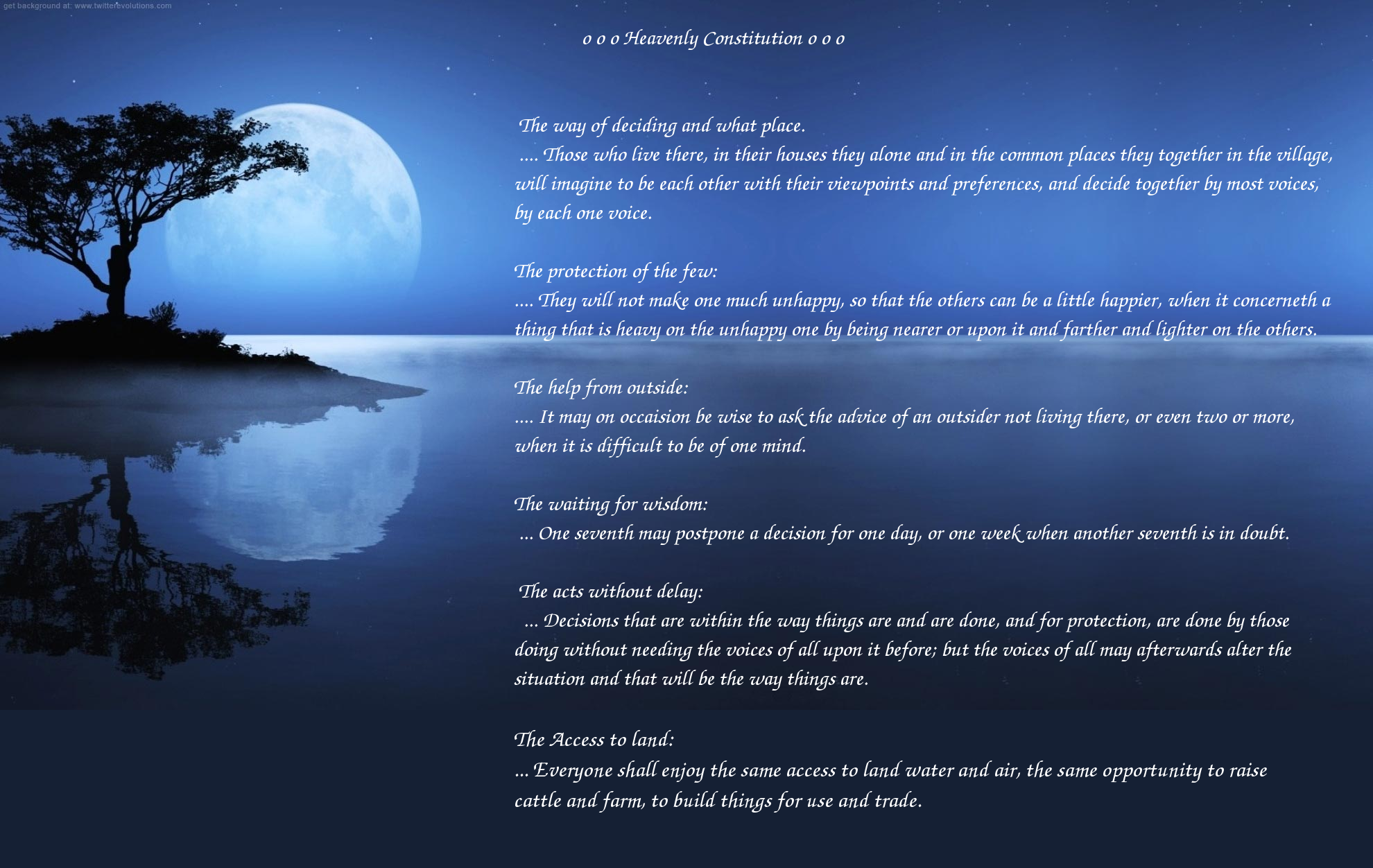