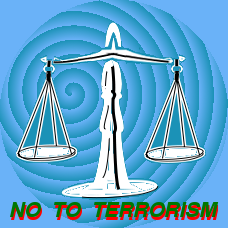 This program presented here is perhaps unusually non-terrorist and inherently does not lead to terrorism done by those furthering this program. There are quite a few reasons for this.


- Terrorism is sometimes used to draw attention to a cause. In that sense focussing on mass demonstrations as a strategy is also attempting to draw attention to a cause; a few undisciplined people might push it too far and go over into an attempt at a coup or terrorism to draw more attention. This program to the contrary does not focus on demonstrating as a strategy (see o-3).

- Most if not all of the activities here proposed are peaceful and constructive.

- To the degree that armed defense is organized here, this is decoupled from political pursuasions. This means that our armies, if any, defend anyone from violence, assassination attempts and terrorism, even if they are our sworn political opponents (see o-5).

- The program synchronizes both the historical ideals of the free market proponents, as well as those of the socialists and democrats. The program is quite vast in total, and is rationally argued. This means it is not a radical program, there is something that most people will like probably. Therefore the conflagration between proponents and opponents is likely to be not so dramatic and hopefully will remain a debate about arguments.

- The program does not want a minority of proponents for this program to grab power, which is how the word 'revolution' is sometimes taken but not how it is used on this site (for the minority take-over the word coup is used here.) Revolution just means major development in a society, involving Government and economics or rights. It is not meant to mean bloodshed and violent takeover. You can use that word that way if you want, but it is just not used that way in this program. The revolution proper is defined in o-4, it only takes power once most of the people want this, or it is the largest supported system in that nation.

- The program funnels the energy and attention of the proponents of it to constructive endeavors such as buying fair trade, understanding the logic presented and/or improving upon it (o-0), making democratic businesses (o-2), funding them (o-2), buying fair trade (o-1), creating political parties (o-3), and organizing in a good-cause proto-Government (o-4). To the degree there is armed resistance (o-5), this is both disciplined and only for large such organized groups to take strong action against a tyrannical Government by protecting those it wants to send death-squads after (Brigades, more then 7000 people in detailed military hierarchy with internal democracy - these Brigades are there to protect people from death-squads and other terrorist teams). - Only under the worst of tyrannical situations is a cell resistance suggested, for which the goals can not be prescribed well because this will give the enemy too easy a way to roll it up. In this situation the Government is already an entrenched criminal Government. Still for these cells there is no terrorism suggested either; terrorism is just not on the menu, sorry. Armed resistence under the most drastic forms of repression are on the menu though. I do not think anyone in their right mind with a minimum of historical perspective will think that is radical. To not resist a violent tyranny - however that resistance might be done - is rather a radical (non-)act of supporting criminals who rule by terrorism, torture, death-squads and deception (criminal oligarchy). You will notice that whenever possible this program here pulls people away from this cell resistance to the more potent but also more peaceful and constructive other ways to improve the conditions in the nation. When a criminal oligarchy starts to fail the resistance starts to do these more peaceful and constructive methods because it finds it is no longer murdered for such simple acts as having an opinion, or organizing a business, or defending someone from murder. Violence is not seen as a potent method in this system, organization is seen as a potent method instead, and the constructive activities these organizations engage in - which will both create a society but also (if done succesfully) heap honor on this effort which makes is spread by example.

To diffuse that threat everyone must understand that this program is inherently non-terroristic. We will of course support and if possible attempt to investigate terrorism and other violent crime to bring the criminals to justice, which is not terrorism but law-enforcement.

When you see people wearing the colors of this system, but they commit acts of terrorism, then you know these are criminal infiltrators who are against us. It may be a good idea to wear the above graphic somewhere, or use something similar, to put this issue in the front of people's minds because if we don't we become more vulnerable to false flag terrorism - which is not only a set-back to this effort, but also costs lives and hurts people in general.

Do not underestimate the bloodlust of the enemy, or their cunning. 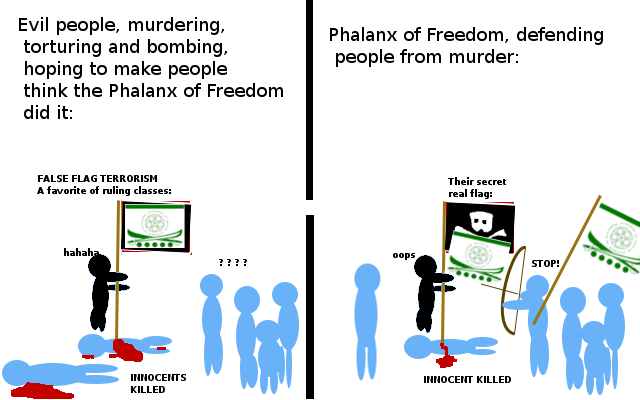 No to the United Nations 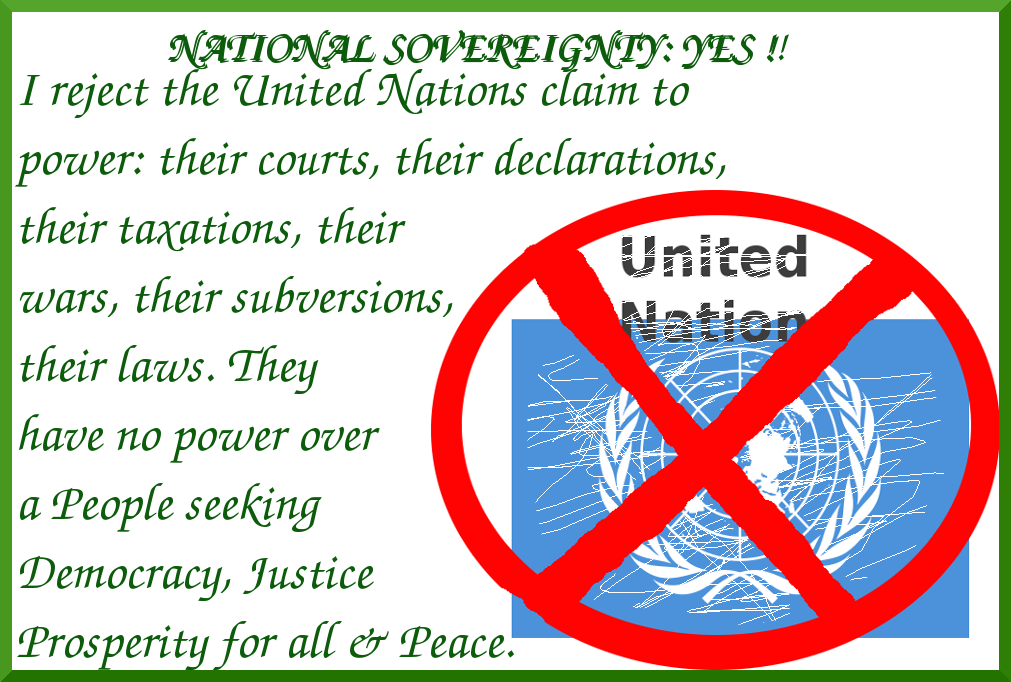 The United Nations is attempting to destroy the basic rights, not just by the practice of their lust for power, but also by their Human Rights declaration. This human rights declaration first lists all kinds of rights, and then says that those rights have no more validity if they go against the purposes of the United Nations (Article 29 member 3). (You can look this up if you so wish. I would rather not contaminate this site too much with United Nations devices and propaganda weapons. It should be easy enough to find it.)

Since the Dutch nation (Netherlands) has been so careless as to sign that declaration; I hereby reject the United Nations declaration of Human Rights, as an attack on those Human Rights. I also reject the attempts of the Dutch ruling classes to destroy the Dutch Constition and subvert it in their international oligarchy. They have no right to do what they have done, they have broken the bonds of our Constitution and fundamental rights. They have subverted the Dutch Constitution by saying that a treaty has more power then the Constitution (the coup of 2002 done by Wim Kok, Chapter 5, part 2). That was an illegal and absurd change, which was made without consent of the people, and not conducted in the spirit of Constitutional changes which seem to be the spirit of the Constitutional law on how to change the Constitution.

The changes made in 2002 are illegal. Charges of impeachment and treason may be necessary to protect our Republic and the rights of the people. A criminal pattern is known of the High Court in the Netherlands back from the occupation by the Nazi foe, when they where eagerly working with the occupier. About 3 decades later, this High Court again committed treason by placing the Dutch Constitution below the fumblings of international power mad cliques (1978 9 March). In line of this attack on the Dutch Republic (or nominaly Kingdom of the Netherlands) then comes the coup of 2002, which attempts to anker the treasons into the Dutch Constitution.

Perhaps it is good to let it be known that the U.N. has not absorbed your rights either, because the Governments have signed these documents which are unacceptible, and claim that through them you too have relinguished your rights. I HAVE NOT RELINGUISHED MY RIGHTS TO ANYONE.