A complete army system: from a fighter (one person) with direct section/corporal all the way through group/sergeant, platoon/lieutenant, company/captain, batallion/major, regiment/colonel, brigade/corporal general (in this system), division/sergeant general, corps/lieutenant general, army/captain GENERAL ... and a staff generals strategic advice office with major general, corporal general, campaign general (which is up to 64 armies).

Who appoints the top commanders ? Obviously we can't put that power in the hand of the tyrannical Government we are fighting. The mentioned army hierarchy has fixed sizes, but a group of willing fighting men (women) may have any size. For example they are 500 strong, and wish to organize themselves. They then - in this system - follow the voter-group model for 500 persons 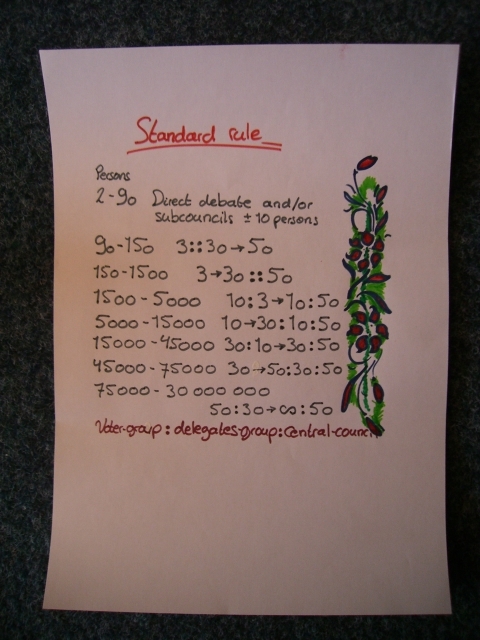 , so that means they break into voter-groups of 10 persons, each selects one delegate, the resulting 50 person council appoints a top commander and if wanted the 2nd in command as well. In this case at 500 persons they are several companies ... 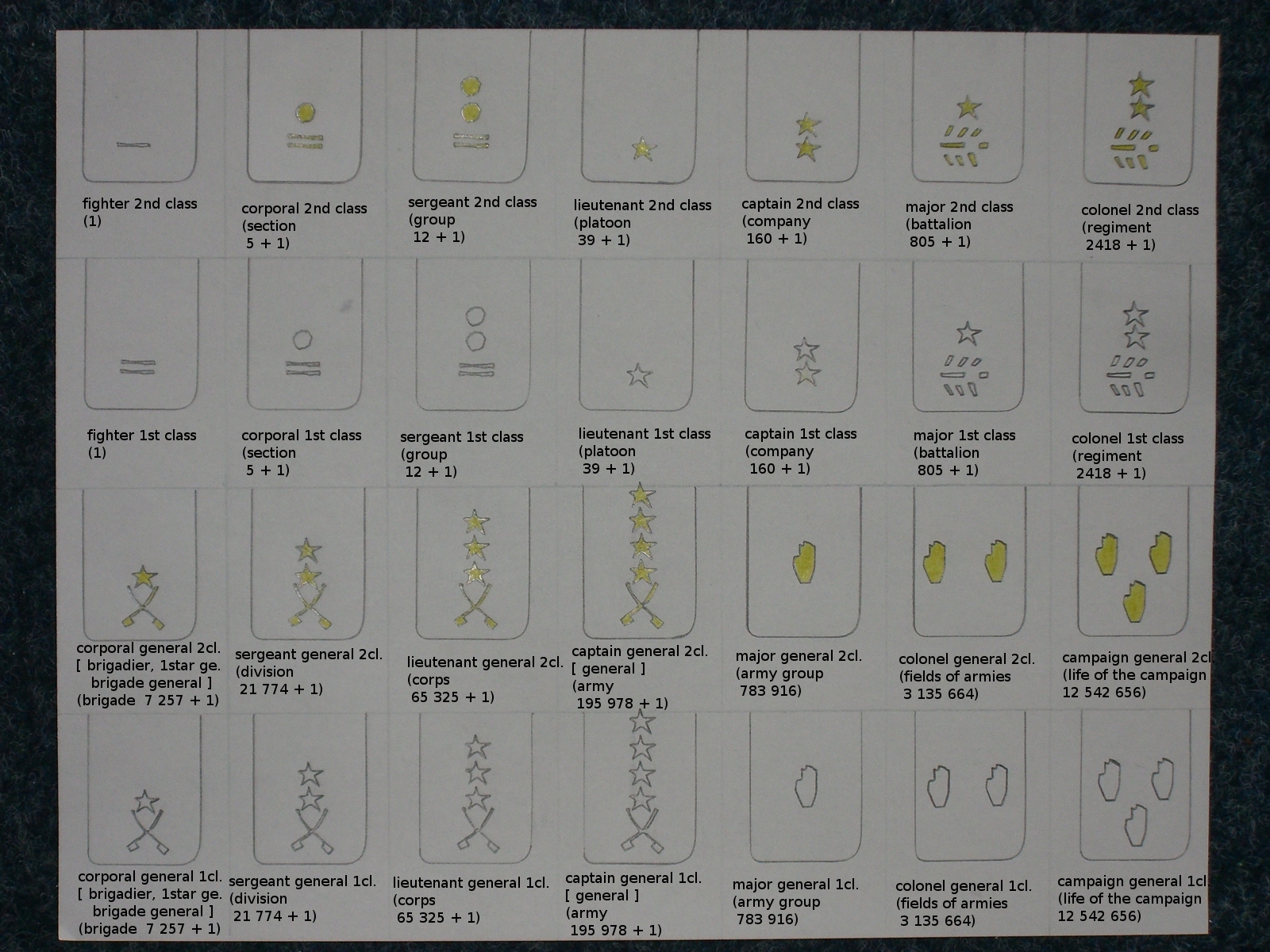 Once they have that, these commanders can use their power to install all the other ranks. You can see in the table that one Batallion is 805 persons plus a major, and a company is 160 persons plus a captain. Hence they are 3 companies plus change, which means they will appoint a major at the top, then 3 captains over each company, 4 lieutenants over each platoon in each company, 3 sergeants for each platoon, and 2 corporals per group. Done ! The democratic council doesn't have to do anything else until the Major dies or starts to act up to the degree it needs replacement. No need for lengthy debates on the battle field (which would spell defeat).

The goal they fight for: freedom of speech and freedom of assembly, for us and our opponents. So that means they would engage repression forces with deadly force. But ... to prevent lunatic actions, no units are to engage in actions other then sanctioned by brigade Generals or higher.

Example: a group of 5 men that know each other, see the writing on the wall and decide to start training to become a small section in the spirit of this system ... 1.5 years later and a lot of training bullets, nightly watch training and pooring over old battles later, things have deteriorated in the nation; they meet up with 2 other such small units, and become the nucleas of a regiment in their area ... then the death squads appear and the civil war is on .... we are well prepared and people flock to our side in the tens of thousands ... it wasn't long before we had total victory. At that point the Phalanx of freedom (name of this system) Generals are in practical control, but on victory that power goes over into the specialists who set up a new civil Government .... (the 'Purple Brigades' of the Phalanx of Freedom - specialists who can set up several types of civil Government and try to give the People what they want within 3 month after which they are out of power either way...).

Example 2: get your ammo.

Link: Phalanx of Freedom
Link: directory with stuff about this

Some pictures of a 3D installation about this 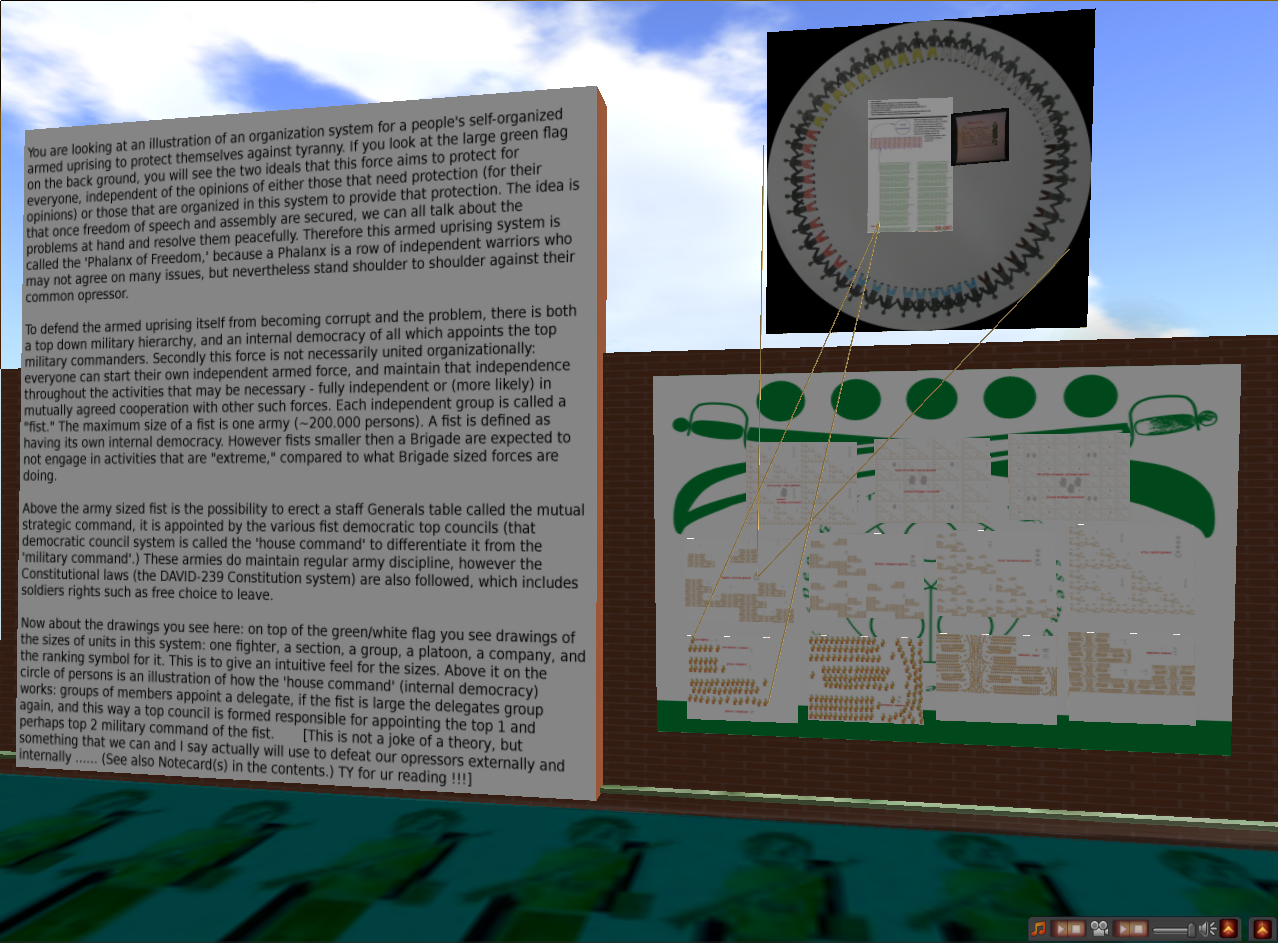 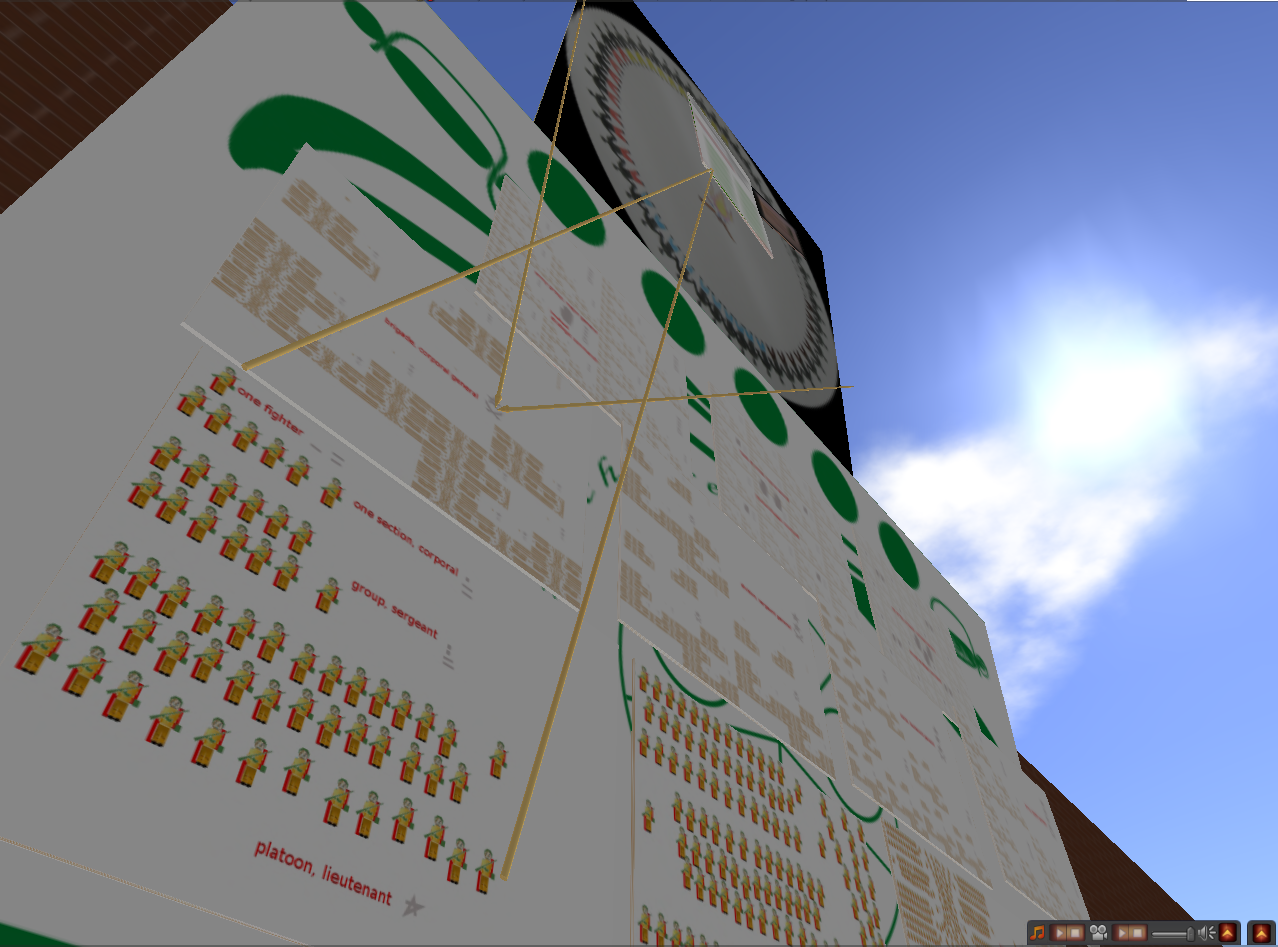 Above: these guys form a voter group... 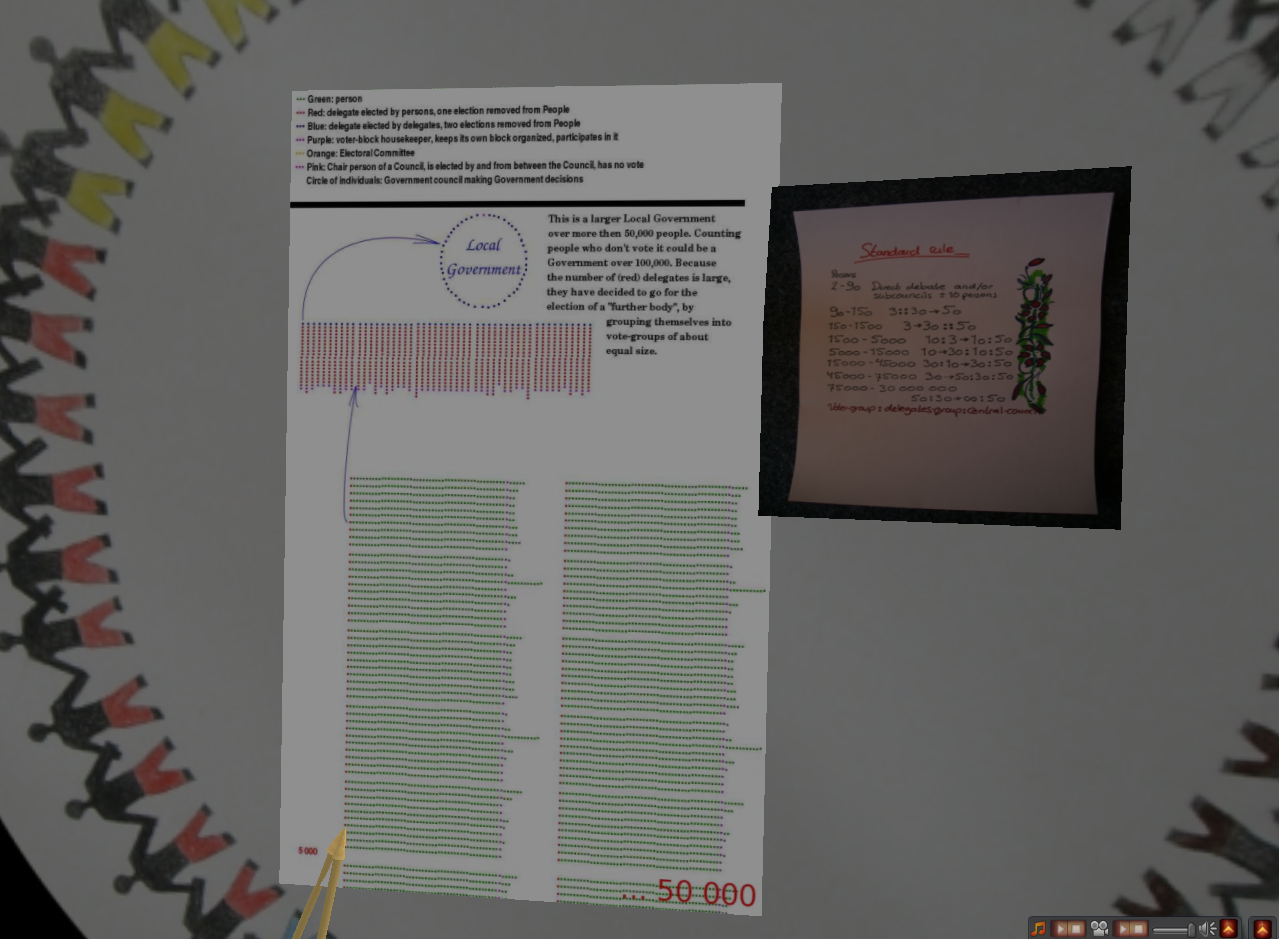 Above: There you see them again but now as green dots, that third horizontal line from the blank space near '5000'. The two arrows point to the delegate they have elected. 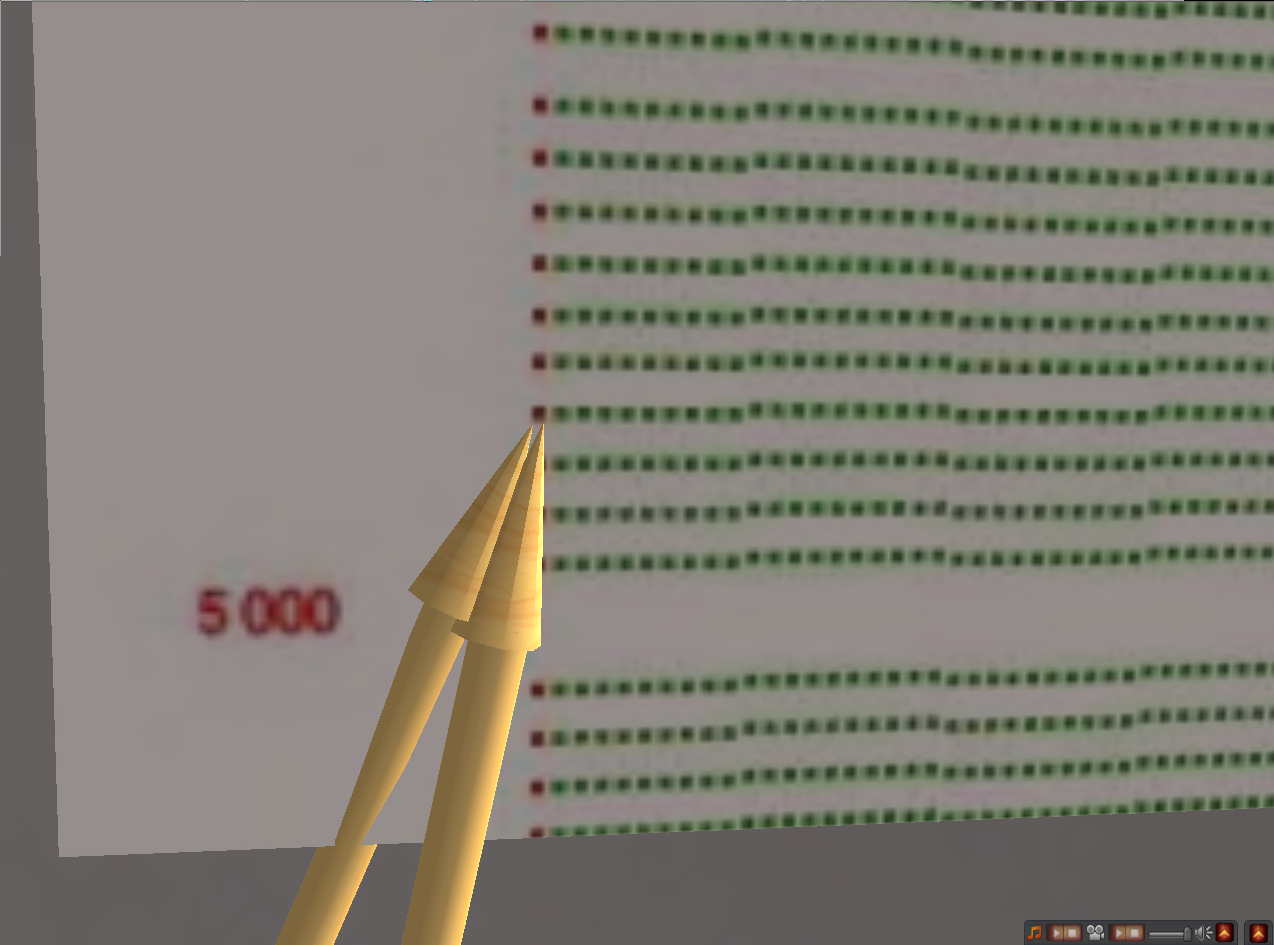 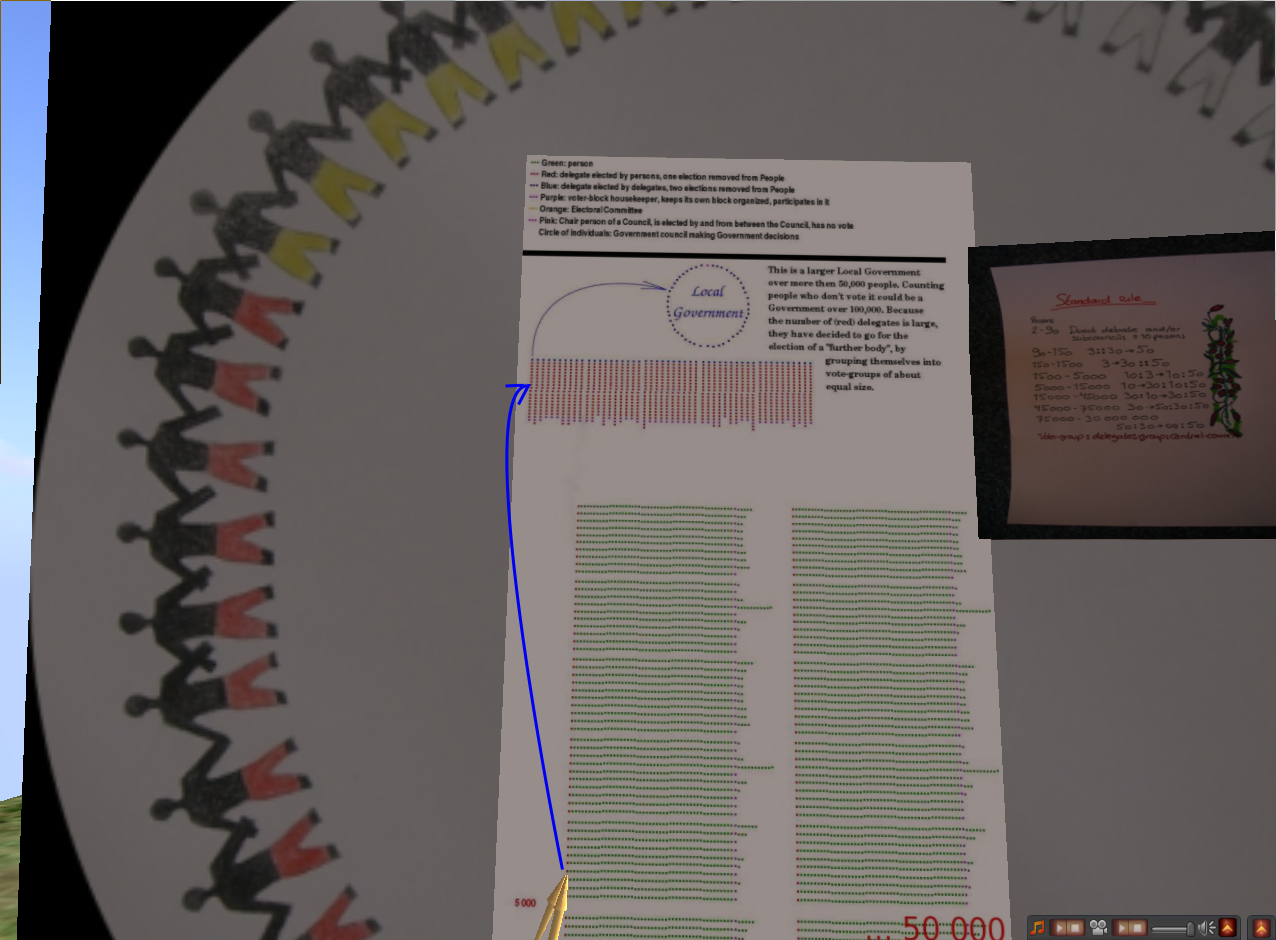 Above: and now their guy is forming with some others who are also elected, a group who will elect someone, but it has to be one of them. 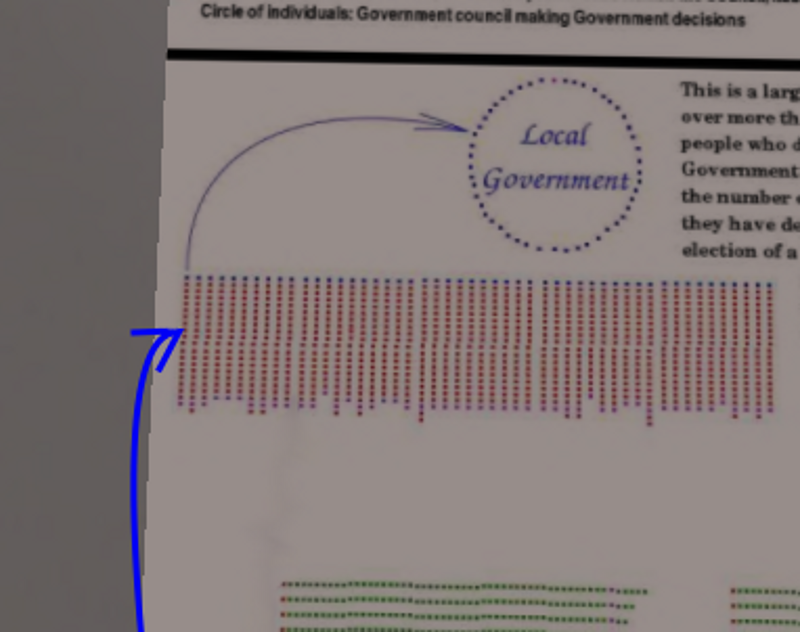 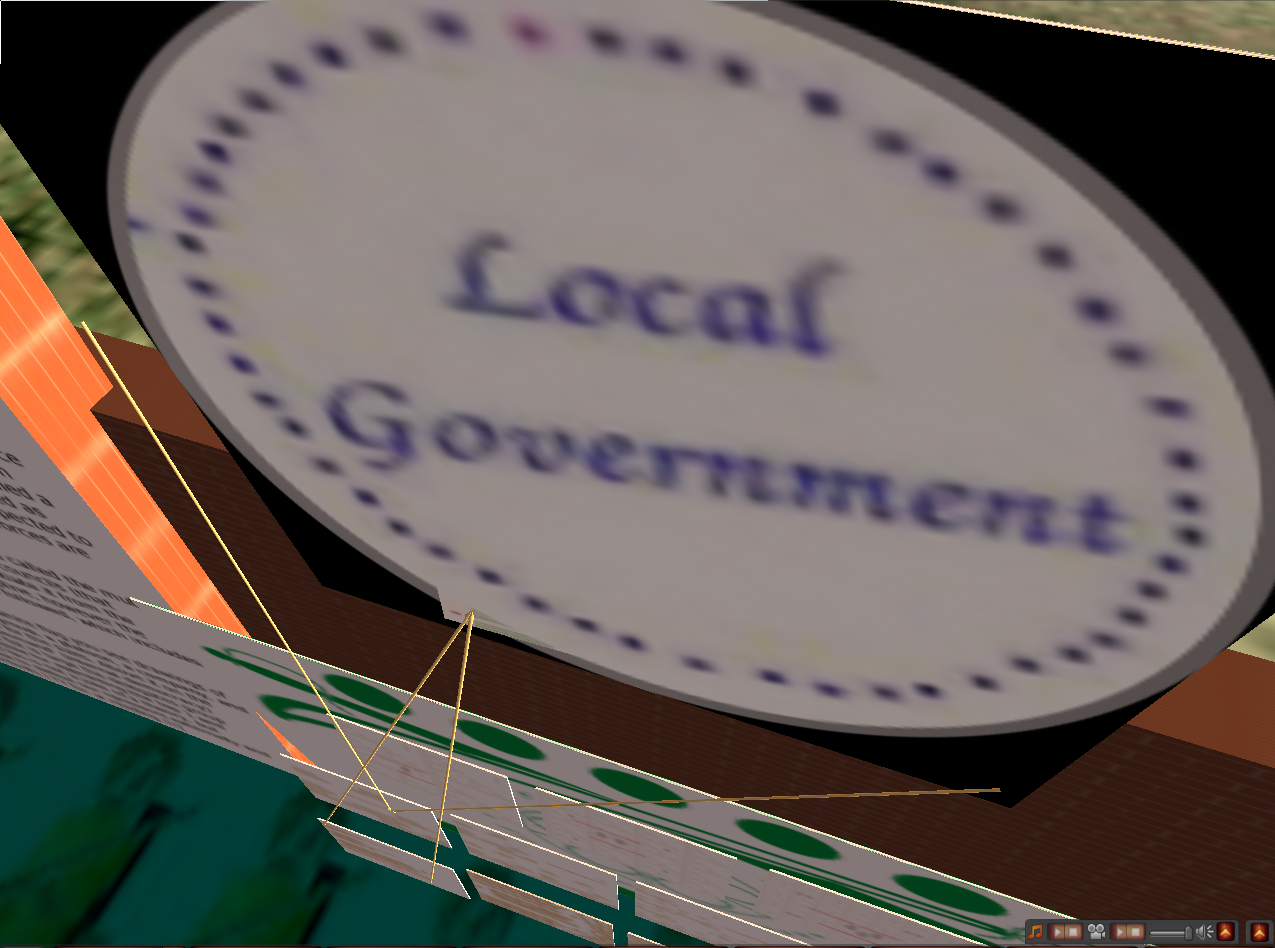 Above: and then we have a 'central council' ... (the blue circle), and they elect the top (and if wanted 2nd) in command (or what they do, but that's the basic idea at least.) 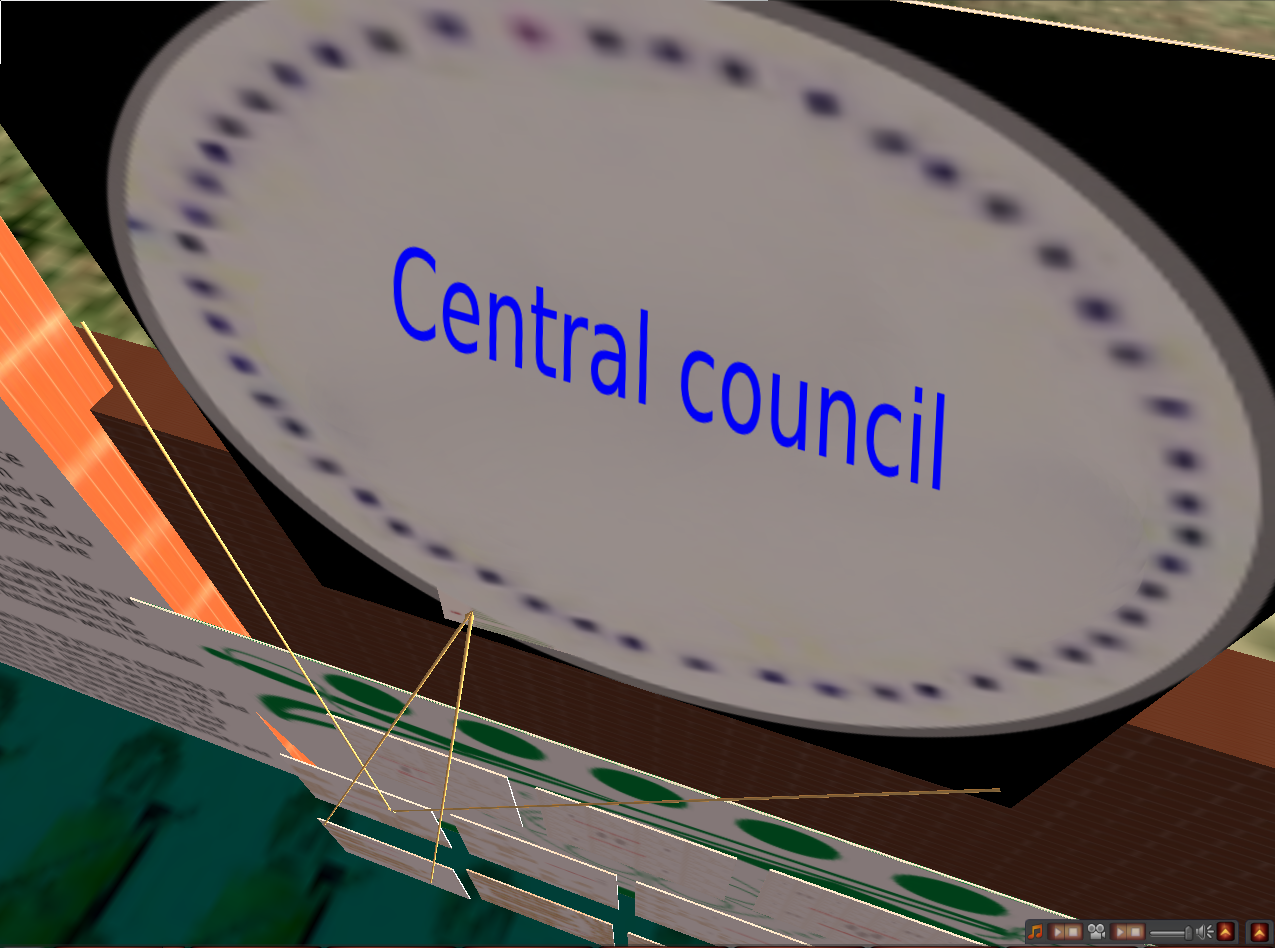 Above: why not call it central council then ? Good point indeed, there you go (sorry, but i re-used the graphics for the Government system, which are the same system). You prefer another name ? Fine by me of course ! 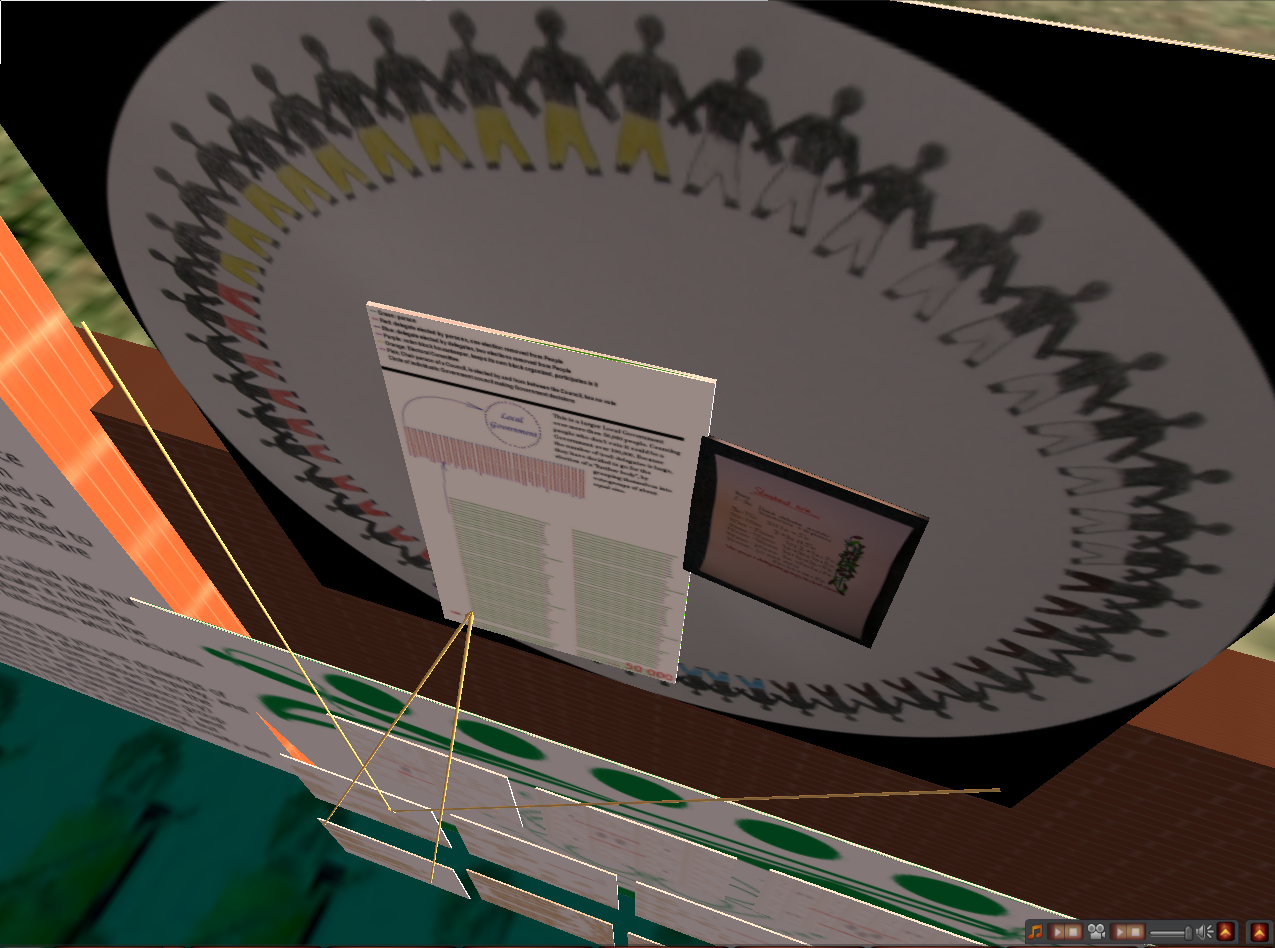 Above: so that's what is meant there right above, the large circle of people with colored trunks is meant to represent that central council. 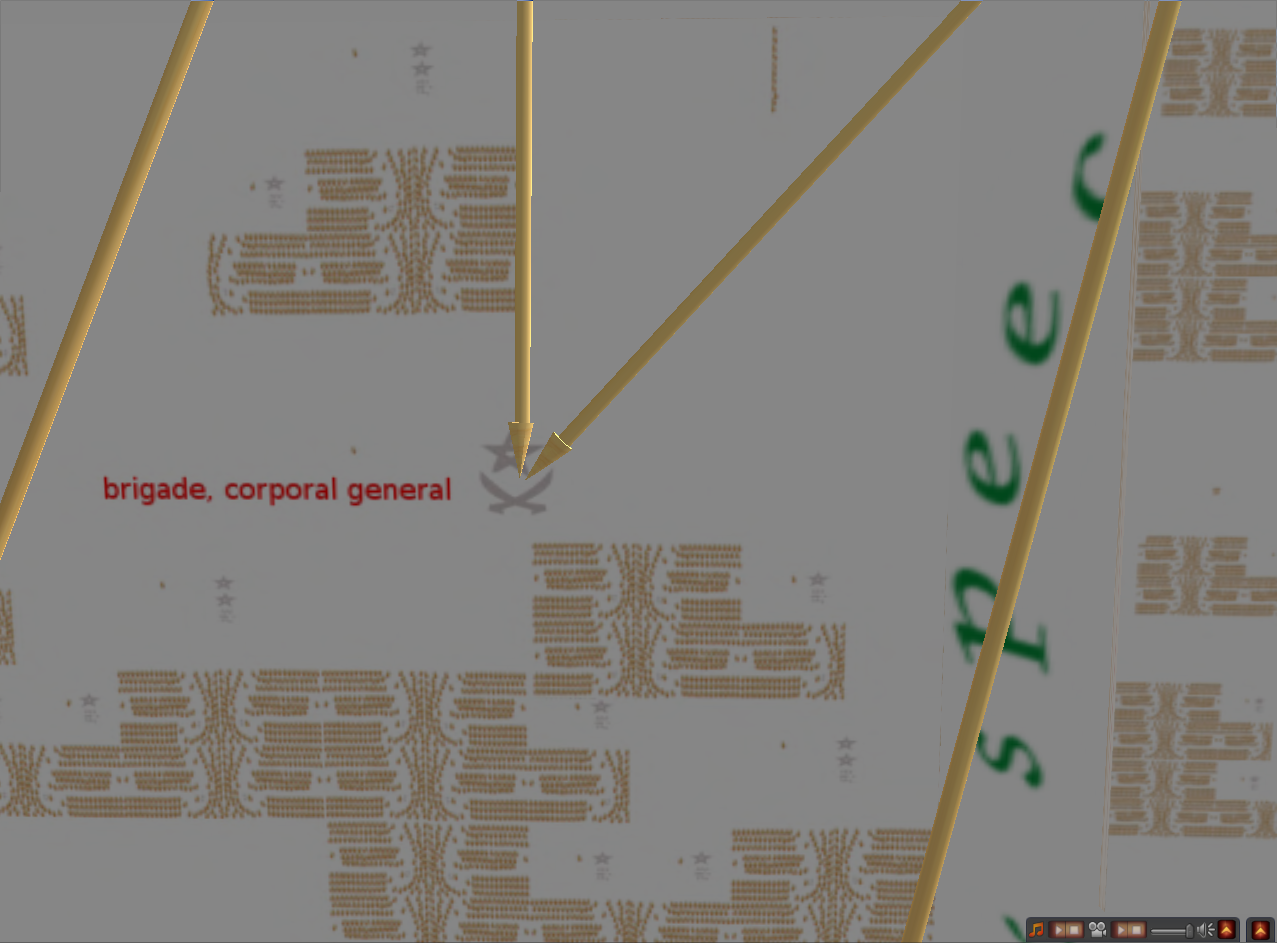 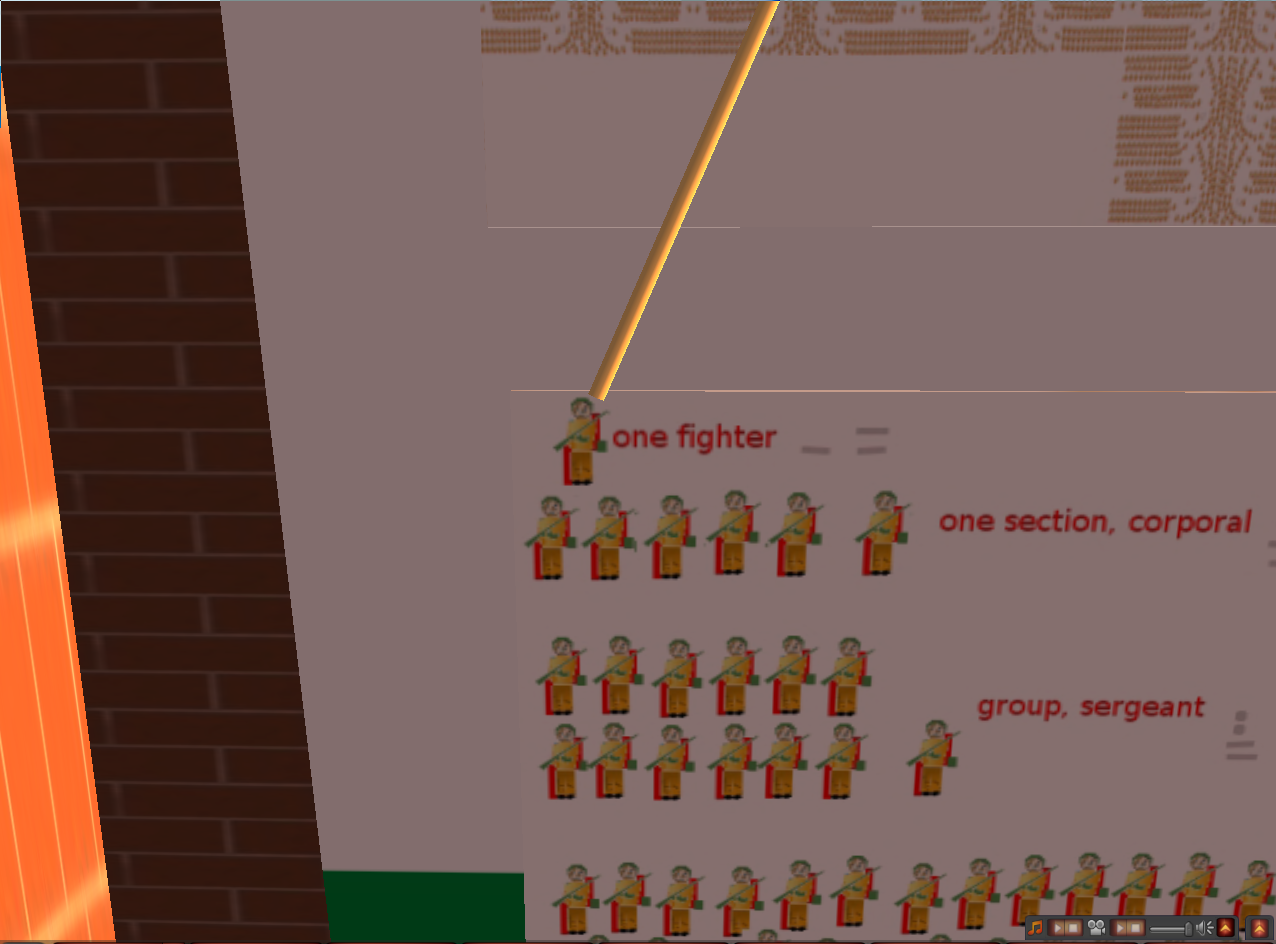 If this still sounds complicated, then i guess that is my fault.

Who keeps this system stable ? Each voter-group first selects someone to run the vote in that group, and they are responsible for the coherency of their part of the system. They answer to the person higher in this hierarchy who has that role as well. This is also true for the 'central fist council,' who has elected someone in that support role, and that person is ultimately responsible for the coherency of this in the whole fist.

Note that the amount of people shown in the upper circle is the usual graphics to illustrate a further Government; which as the graphics shows happens to be for 50.000 persons. However the arrows 'only' point to a Brigade General, which is only 7258 persons. Which means that the 'delegates voter groups (the verticle rows of red delegates electing a blue one) are ... ? Shorter, if they only have a Brigade size (and not 50.000 persons, which is 2 about Divisions in this system).